What is Watered Stock?

Watered Stock refers to those company shares, issued at a price which is much higher than their intrinsic value, with an intent to dupe uninformed investors. However, the supervisory bodies introduced various regulations to structure the stock issuance process with the objective to put an end to such malpractices. As such, the last known issuance of watered stock happened several decades ago.

Etymologically, the term was originally used for the method of making the livestock drink large amounts of water right before selling them in the market. In this way, the animals gained extra weight because of the consumed water and looked deceptively heavier, allowing the breeders to earn higher prices for them.

The companies can overstate or overvalue the book value of the assets via several unscrupulous methods. For example, false escalation in property or inventory value, an increase of stock capital through the issuance of fake employee stock options or stock dividends, etc. At times, the promoters of the companies also make exaggerated claims about their profitability to raise investor expectations. After all this, the promoters deliberately sell their stake in the companies at a par value that is much higher than the book value of the underlying assets and make fortunes for themselves while the unaware investors are left high and dry with a massive amount of losses. 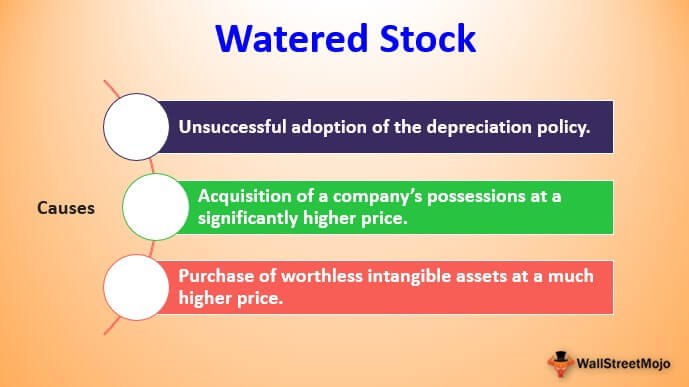 First, let us understand how watered stocks work with the example of a fictitious company.

Let us assume that the promoters of BNM Inc. had assets worth $5 million in the form of land, buildings, equipment and inventory. The company then decided to go public and hence started to inflate its property value such that its expected market capitalization went up to $15 million. So, effectively the company is overvalued by $10 million, and it exposes the investors to what is called watered stocks.

Now, let us look at some of the real-life examples of watered stock frauds from the past.

The period from 1866 to 1868 was the time when the infamous Erie War took place. The notorious trio of Daniel Drew, James Fisk and Jay Gould defrauded Cornelius Vanderbilt. He wanted to acquire Erie Railway Company and build a railroad empire of his own because he realised that there were many business and financial opportunities available in the railway’s sector as it was booming after the American Civil war. The trio sold him watered stocks of Erie Railroad worth $7,000,000.

However, later the trio was forced to return most of the defrauded money and in exchange got back the control of the company. The company went through several other financial frauds before finally declaring bankruptcy in the year 1878 owing to continuous mismanagement, after which it was reconstituted as the New York, Lake Erie and Western Railway Company.

In the year 1873, the Railway Commissioners of Illinois stated that stocks of railway companies worth $75,000,000 were watered, which otherwise expected to generate $6,000,000 in profit for the shareholders every year. These malpractices were not just confined to the state of Illinois but were actively happening across all the states, mostly in New York, New Jersey, Pennsylvania and the Pacific States.

An investigation uncovered that 60% of Central Pacific Company’s $100,000,000 stock capital was based on fictitious profits that the entity refused to share among the shareholders in the form of dividends. The company’s inflated revenue/ gross receipts coupled with high profitability drove the stock performance.

Over the years the use of watered stock has been heavily criticised by various experts, such as Walter Rauschenbusch and George D. Herron. Some of the major criticism is as follows:

So, as we all know that “All that glitters is not gold”, similar is the case with growing stock price. As such, one needs a lot of experience and expertise to be able to spot these watered stocks out of so many overvalued stocks. So, before investing in a company, it is crucial to analyse its operations to understand the fundamentals of the business and its growth potential.

This article has been a guide to watered stock and its definition. Here we discuss examples, causes, and advantages of watered stock along with criticism. You may learn more about financing from the following articles –